Brigadier General Nahidul Islam Khan was born on 14 August 1968 in the district of Mymensingh. He is the son of heroic freedom fighter and retired police super Nurul Islam Khan. He was commissioned on 23 Dec 1988 in the corps of infantry. In his long distinguished career Brigadier General Nahidul Islam Khan has attended several professional courses both at home and abroad. He is a graduate of Defense Services Command and Staff College and National defense college, Bangladesh. He has done PSO instructors course from from USA. He did his MBA on Human Resources Management.

Brigadier general Nahidul Islam Khan took over Bangladesh National Cadet Corps as Director General on 30 Jan 2020. He has served in different appointments in his long illustrious 32 years of military career. He served as Commanding Officer of 32 East Bengal and Infantry Security Guard at Kuwait, as Staff officer in Division Headquarters and Army Headquarters. He also served in DGFI, NSI, BGB and as the station Commander of Cumilla. He was the operation officer and Deputy Commander of President Guard Regiment. He completed his UN mission in Bosnia and Herzegovina under UNPROFOR. 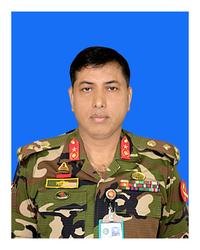